Maya Taneva 2 months ago No Comments 0 likes
Warning: A non-numeric value encountered in /customers/5/3/8/lucify.ch/httpd.www/wp-content/themes/cuckoo/single.php on line 59 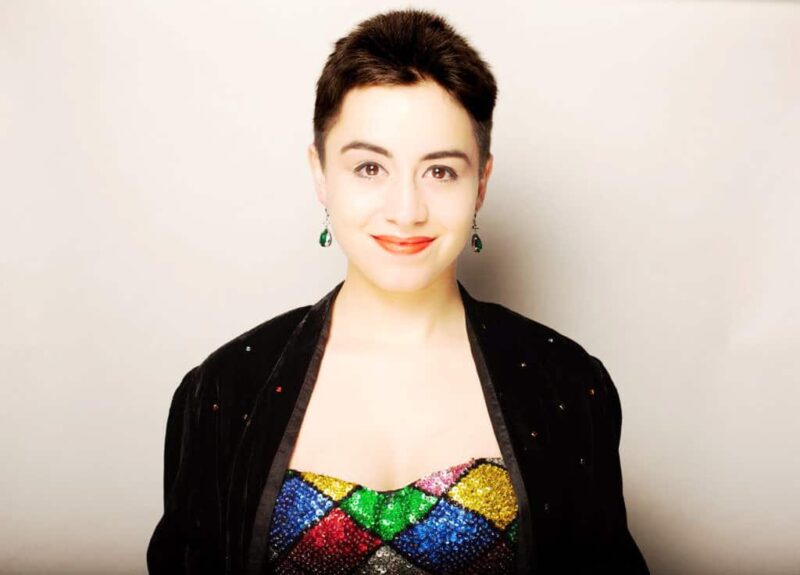 Caro Knaack is a multi-talent: saxophonist, dancer, singer and a comedian who can tell her jokes in 4 languages. As part of the “Comedy Women” network, she presents her own version of “women with balls”, poking fun at her own life story that looks like it came from a Mexican soup opera plot.

The lucify.ch editorial team met Caro as part of the workshop series organized by We Stand Up Project. During the workshop she gave an input about her own experiences with stand up comedy shows. After the workshop, we took the opportunity to talk to Caro about her involvement as a female comedian in the Swiss Stand Up Comedy scene.

Caro tells her story on stage about what it’s like to be an expat woman in Switzerland in the 21st century, and she does it in four different languages: Spanish, English, French and German.

“German is not my strong point, but the hell with it! If people laugh, I’ve achieved my goal,” says Caro Knack.

Caro tells her story of a contemporary woman trapped in a Mexican soup opera with perfect ease. She uses her acting skills as well as her pretty face to create a dazzling contrast between existing stereotypes and a woman’s actual life.

Using humor, she touches on many sensitive women’s issues and many contemporary challenges that women face. Through her performances, she aims not only to make her audience laugh, but also to make them think about these issues. She feels “shameless enough,” as she said in the interview, to talk openly about intimate life situations that we usually never share with anyone. She enjoys publicly sharing some bizarre aspects of our modern lives and is not ashamed to be silly.

“Comedy,” she says, “is all about relating,” and she feels fulfilled when the female part of her audience can relate to what she’s telling them on stage.

We asked her how it feels to be a young immigrant woman in Switzerland trying to build a career as a comedian? How much courage does such a woman need? What are the challenges of facing an international audience and still staying in touch with your own Mexican roots? If you want to find answers to all these questions, be sure to watch our video interview below.

And if you want to know why she received the Swiss Comedy Talent Award 2021, be sure to check out some of her stand up comedy shows in Switzerland at her Instagram.

In case you are in the train and you forgot your headphones, you can read the lines of the interview bellow.

Lucify.ch : tell us something about yourself?

Caro Knaack: my name is Caro. I grew up in Mexico. It’s been 8 years since I’ve been here in Switzerland. I am living here an studying and currently working as an artist. I focus most of the time on my stand up, which I do it in 4 different languages: English, German, Spanish and French.

Lucify.ch: what are the challenges of being a woman comedian in Switzerland?

Caro Knaack: I think that the issue is, that we women waren’t taught, to be as extrovert and as confident as our male colleagues, that have always been. We should always be the cool girl, the descent woman, the silent woman who is sexy and looks wonderful, but she has to keep her mouth shut. And especially she doesn’t say stupid things.

In comedy a lot is about talking naive stuff. Silly things. That’s what comedy is all about. So, when a woman does that is not as welcomed. It’s way more acceptable to be a silly man than to be a silly woman.

Lucify.ch: How does the woman part of your audience react  to your comedy?

Caro Knaack: it’s a really nice challenge, because you get the chance to inspire other people, and in my case, I inspire other women. A lot of women have told me that they relate to me. And comedy is all about being relatable.

I have lot of topics regarding sex, and how is it for me to live as a young woman in the 21 century. I think that’s relatable and I think that’s what motivates some women too.

Lucify.ch: what kind of humour can we expect at your stand up show?

Caro Knaack: Lot of comedians talk about a „persona“. It is a certain type of character that you’ve built yourself, when you perform, even though that’s not the real you 24/7.

I developed a persona who is very direct, who talks about all these topics, who you wouldn’t really expect to hear from a person that looks like me. Lot of comedians tell me that the reason why I am successful by doing what I do, it’s because I look so cute, even though I am talking about things like: penetration, „would you go down on me“.. and all these kind of „hard stuff“.

Lucify.ch: Humour can be transformational. Which techniques do you recommend?

Caro Knaack: My philosophy is the following: either you can play as the victim and you can act in a hateful way, with violence, by hating everyone, by accusing other people. Or you can turn it into something positive, even attack people or at least make them think, by the craft of making them laugh.

Calm down. Be smart enough. Use your intelligence to talk about the topic in a way that the people are willing to listen to you. Make them leave the conversation in a good mood.