Anna Butan 7 months ago No Comments 1 like
Warning: A non-numeric value encountered in /customers/5/3/8/lucify.ch/httpd.www/wp-content/themes/cuckoo/single.php on line 59 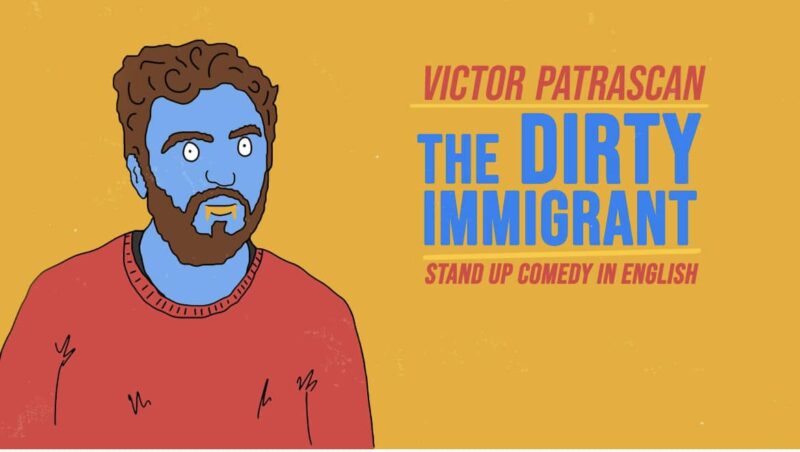 He finds that being an immigrant is a new normal. His shows can connect people coming from opposite sides of the planet. Victor Patrascan, a Romanian born stand up comedian, gave an interview to Luficy.ch prior to his show “the Dirty Immigrant” in Basel, Bern and Zürich.

Could you please tell us a bit more about yourself?

I am a comedian. I started performing stand up about 10 years ago but started taking it seriously about 5-6 years ago. It was my childhood dream to become a comedian. It is all I have ever wanted to do. So I am living up my dream. It is amazing!

Why is your show in Switzerland called “The Dirty Immigrant”?

It is because I am an immigrant and the jokes are dirty. The show tackles the issues of immigration but in a very dirty way…If people take anything from this, that is amazing but I mainly want them to laugh.

What is your main audience?

How did corona lockdown affect your performances?

It was weird in the beginning when the whole world was locked down but as soon as the borders opened I could travel again. I do not like the online shows. It is not conducive to comedy and I am not comfortable with it: not being at the same place with the public.

Please tell us about your own experience of immigration.

I left Romania about 10 years ago. I am an immigrant everywhere I go. The things that I will tell in this show I cannot tell back in Romania. I basically had to leave to be able to tell the jokes to the like-minded people who can enjoy what I do.
It has not been a painful experience.

I think a lot of people do not live at the place where they were born anymore. It is becming a normal thing.

Everywhere I go – from Poland to Norway and from Portugal to France – people who come to my show are usually those who left their countries and found like-minded people. They are in groups of friends where they might not know each other languages but they communicate in English.
Often couples who do not speak each other’s languages come to my show because it is accessible to both. For example I remember in Münich I met this couple: she was from Belarus and he was from Peru. They were literally from the opposite sides of the planet! They might have not known much about each other’s cultres but they came to my show becauce it was accessible to both. It is amazing: the show is challenging but it also brings people together!

When you first arrived in another country as an immigrant, did you already have invitations for gigs?

In the very beginning I had to do other jobs. I was working in a coffeeshop for a while, then I worked as a photographer and designer. I kept doing it to pay my rent. In the beginning it takes a while until you can earn your life from doing only comedy. First year you need to take side jobs untill it becomes something you can live from if you work hard and have luck.
I did my first show in London in 2012. It was a comedy show organized by the university I went to (that was the reason I moved to London). I took part in it and since then continued doing shows.
On this very first show people complained. I went to the stage thinking that in the UK the audience can understant that in the context of the show people can be ironic and sarcastic and they do not literally mean what they say. People complained to the university and to the comedy club and I was almost expelled.

What did motivate you to keep on doing comedy despite all the hardships?

If you want to do it, you keep on doing it. It is probably a ridiculous and outlandish to think that you can earn your living this way but if you feel like doing it, just do it!

Do you have any role models who inspire you?

What woud you recommend to the beginners in the stand up comedy?

Try it as an experiment first. Join the open mic session. Remember how Jim Carrey started? But if you need an extra encouragement from somebody, probably it is not yours. You need to feel like doing it.

The shows of Victor Patrascan: