Anna Butan 1 year ago No Comments 0 likes
Warning: A non-numeric value encountered in /customers/5/3/8/lucify.ch/httpd.www/wp-content/themes/cuckoo/single.php on line 59 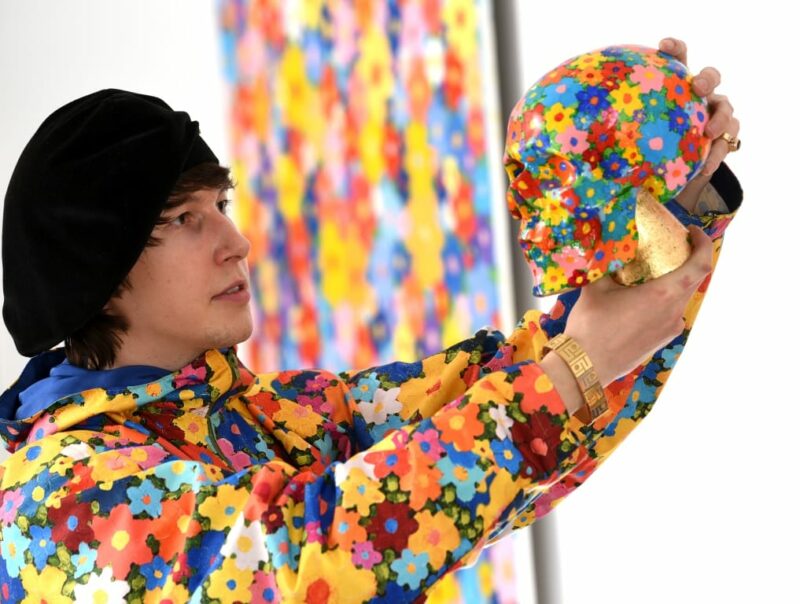 On the 8th of March exactly on the International Women’s Day I was taken away by the flower whirlwind. Flowers from the artist’s canvas. And painted flowers suddenly noticed by me among paving stones in the old city of Bern. The wizard’s name was Alex Doll.

Walking down the old street of Bern someday in February I once noticed a vitrine that stayed out of the others. It was too bright, it was too warm, it couldn’t but catch your eye. Color. A lot of warm colors. Flowers. Everywhere flowers: on the canvas, on the miniature copy of the Swiss chalet,  on a gingerbread, even on a face protection mask. It all contrasted so much for me with the usual greyish sandstone of the buildings in the old city of Bern that I felt carried away by the bright splash.
My son was even more responsive to the warmth and brightness of the artistic vitrine, he just waved to the painter and then the painter waved back. That is how we got to know Alex Doll, the painter and performance artist of Russian descent. He just let us cross the line between the greyish bernese reality and the magic of his gallery by letting us spontaneously step in.
Perhaps it would be incorrect to draw a dividing line between Bern and the galery of Alex Doll because Alex is a true poet of this city. One of the very first paintings that he made in Switzerland was dedicated to Zytglogge, the symbol of Bern and the architectural metaphor of time. Trying to capture the soul of the city and to uncover its secrets, the painter dedicated the whole series to Bern by night. What can be a better way to sense the city and its breathing than walking through it by night?
The artist is always on the move: he is moving across the city on his bicycle.  Besides, he often undertakes a journey to Bernese Highlands (Berner Oberland)  – one of his most beloved regions where he keeps on returning again and again. And of course, as a young talented artist of international level, he is also a world traveller. Centuries ago his ancestors moved from South of Germany to Russia. Three hundred years later he moved from south of Russia (the city of Orenburg) where he lived until the age of 13 in the orthodox closter, to the heart of Europe.
This neverending movement also partly pervades his artistic work: if you keep on contemplating his flower canvas for quite a while, you might end up realising that the flowers are not static-  they actually dance! Alex admitted that by flowers he actually meant people with elevated hands. Not all flowers are the same, they distinguish from each other by slight nuances. This revelation made me look at the flower canvas differently: our society can be metaphorically represented as a colorful flower meadow with unity in diversity. And each human is a flower of some kind: so fragile is the life of the soul and the life of the physical body.

Remarkably, some other time I might have passed by without paying much attention to the bright vitrine of the art gallery. But in the monochrome reality of the pandemic, feeling tired from never ending winter and hungry for something positive I suddenly came across this artistic warmth and felt lifted in spirits.

We probably all needed a bit of flower-injection in our souls in the beginning of March: society was so tired from fear,  negative news and limited social interaction due to covid-19 restrictions.

Later in a conversation, Alex admitted that months of the very first state-imposed lockdown were quite unpleasent for him. It was the period of uncertainty and anxiety. Not only because museums and galleries had to close: living in the heart of the old city of Bern the painter could witness how the always active and vibrant city suddenly became horrifyingly
silent. The only sound of withered autumn leaves driven by the piercing icy wind could be heard again and again. It was pinching the silence like a moan or a plea.
Alex Doll kindly let my son invite his friends from the Russian reading club: little curious explorers, aged 4 to 6 were so eager to visit the tiny but very special realm of the art gallery. Flower theme is something that resonates easily with the soul and mind of a child: dynamic of warm colors, elevated mood, overall positive emotional response. For some of these little boys and girls it was probably the very first encounter with art in their life.
It was twice surprising for me to find out that the bright flower series was born out of the experience of sadness and solitude. Alex Doll developed the flower theme when living in Berlin. Feeling lonely and melancholic in this city he started to create another reality that was much more welcoming. Reality of flowers.
It was initially planned as a triptych but later resulted in the absolute totality of flowers. “Hommage an Blumen” (Ger.) is a multidimensional project that consists of painting (A.Doll), singing by Maria Gridneva (soprano) and Vitaly Makarenko (tenor) from “Open Opera Project”, dance performance  by Alexander Abdikarimov (Staatsballett Berlin) and a perfume “Alex Doll & M. Micallef ” (Maison Micallef, Grasse France). Using unique intermedial form, Alex Doll creates the art that smells, sounds, moves and touches the most intimate strings of the soul.
It would be of course unfair to associate Alex Doll only with a flower theme. He is a very versatile artist, an experimentator, pretty much a philosopher, brilliant manager and an amazing interlocutor.  Such thematic cycles as “Swiss Vision”, “Family” and “Auf Suworow’s Spuren” (Ger.) would provide you with a better overview of his artistic career. Alex Doll is also active in the domains of sculpture, installation, happening and performance. Based on his paintings, a series of postage stamps dedicated to XXII Olympic Games was created in Liechtenstein.

Alex Doll  (born in 1990 in Orenburg) studied painting at an art School, worked in  “Alexandrov Design House” in Moscow. Completed his studies in the  School of Art in Bern . Since 2013 – a member of the Union of Artists of Russia, in 2014  elected an Honorary Academician of the Russian Academy of Arts.

Coronavirus: The Economic Impact
2 years ago