Mahtab Taemeh 1 year ago No Comments 0 likes
Warning: A non-numeric value encountered in /customers/5/3/8/lucify.ch/httpd.www/wp-content/themes/cuckoo/single.php on line 59 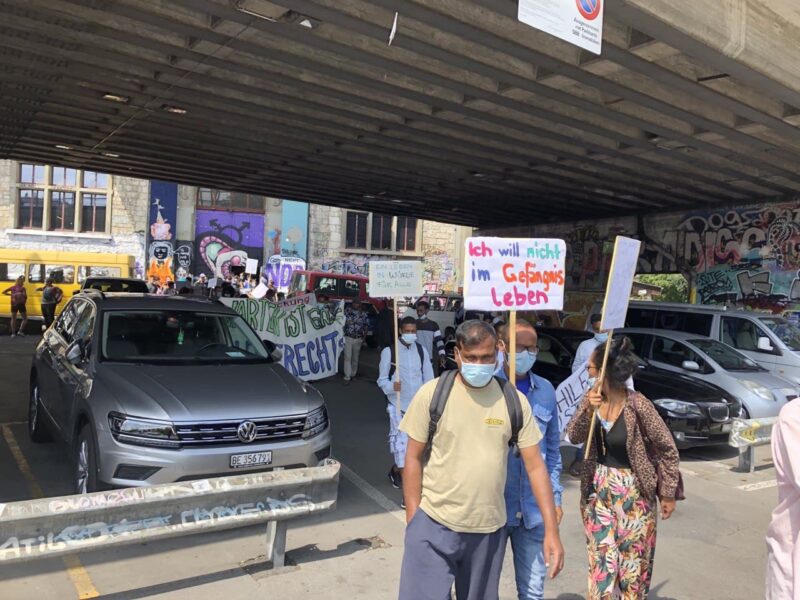 Refugees leave their country because of many difficulties, injustice and fear for their lives. On the escape route they often experience more fear and distress than in their own country. But all the time they hope to soon find a safe haven to live without fear and agony. Most of the time this hope is only a delusion that is not achieved. As soon as they enter the destination country, they enter an atmosphere of sorrow and have to endure a lot of humiliating and inhuman treatment and spend a long time in the hell of waiting. But hope remains. The hope for a little peace and a life with less worries. But at some point one is tired of this unattainable, imaginary hope. Only a refugee who has walked this difficult path can understand and suffer again the suffering with every cell of his body and shed tears and cry with his whole being. A cry that no one hears and tears that no one sees.
I hear many stories of refugees that are not made visible anywhere. And I think all these experiences should be recorded. One of these stories is the story of a woman who shares her experiences with us. This text is bitter and sad, but it is the reality of the world around us.

I escaped from Afghanistan and was on the move for several years. Recently I reached Switzerland. I went to a federal asylum camp to report. Two Securitas people were waiting outside the camp. Inside the office I saw two women. I waited outside the door for about ten minutes before one of them came outside and asked me if she could help me. I said: „I am new here. I want to apply for asylum.“ She said, „Are you from Afghanistan?“ I said yes. She gave me a form to fill in my personal data and showed me a room where I could sleep. After about three hours the woman came back and showed me where I could get something to eat. That night I slept in the room she had shown me before. When I woke up in the morning, four other people were sleeping in the same room as me.

After breakfast, the people from the office gave us tickets and a map that would show us the way to a federal asylum camp in another part of Switzerland. When we arrived there, we saw other people with cards in their hands, which were also transferred: We, to X. They, away from X…

In the camp we were sent to a waiting room where six other people were already waiting. Later our fingerprints were taken. They took pictures of us. We waited from 14.00 in the afternoon until 23.00 at night. Then they sent me to the second floor, where there was a room marked „Quarantine“. The others slept in the waiting room.

Two days passed before they took me to another building where there were other refugees. There I was shown where I could find everything: Bathroom, office of the employees, Securitas office, doctor, bar, room with clothes, washing machine, etc. According to these explanations, many things would be there… Experience showed something else: When I tried the washing machine, it did not work. So it was not possible for me to wash my clothes until now. I didn’t get any exchange clothes, until I could organize some outside of the camp for free. There is other things that leave me waiting: I had my first interview where I was asked for personal information and my escape route. During the medical check I asked for psychological support. I only got one appointment with a psychologist, but since then I haven’t had one. They gave me medication, psychotropic drugs. They confused me and I couldn’t think clearly anymore. So I only took the drugs once. Many days have already passed, but I have only seen a nurse once regarding the injuries on my leg. It was only after I insisted several times with the ORS employees and finally showed my leg, which had become more and more inflamed and swollen, that they gave me an appointment with the nurse for the following week. It took me four days to organize hygiene items like towels, shampoo, soap and tissues. I had to ask one employee after another until I finally had everything together.

In general life in the camp is hard. The employees are not interested in the people here, not even in children or the sick people. They are also rarely to be found in the offices. We have to look for them all the time and when we ask questions, they answer briefly. Usually the answer to a question is: „I don’t know.“ Although most of them can speak English, they answer in French. Even if they know that, for example, I do not understand this language.

Despite the situation with Covid-19, the kitchen is only open for 30 minutes in the morning, people have to stand in line and wait for food. The quality of the food is very bad, the quantity of food for people who eat vegetarian is low. Taking your own food from outside into the camp is forbidden. Refugees living in the camp work in the kitchen. The refugees work under the supervision of one or two ORS employees, who do not help themselves, only control. After four or sometimes five days, the refugees receive a small amount of 30 Swiss francs for their work.

I feel like a prisoner here. We have to obey incomprehensible, irrational rules and follow a system that makes no sense. We are not allowed to be in the common room after 11 pm. There is a strict order to stay in our rooms. During the meal times in the morning, at noon and in the evening the gates to the camp are closed, no one can enter or leave. The only way to get out of the camp is through the entrance and exit gates. These are always locked. You can only get out with permission from the ORS. Therefore the „white paper“ which we have to carry with us will be replaced by a „red paper“. With this we are allowed to go outside. If we want to smoke a cigarette, we also have to ask for permission so they open a gate for us. Also for this we have to give them our „white paper“ until we are back inside. Sometimes they refuse us to smoke, then we have to wait for hours. We are not allowed to go smoking after 11 pm, and we are not allowed to leave the camp after that time. We have no balcony and the backyard is closed.

At the moment there are about 200 people in the camp. Every day new ones arrive and others are transferred away from here. In my room we are currently 15 people. There is smoking in the room. Conflicts are the order of the day, every night there has been a series of fights. Alcohol and drugs are actually forbidden in the camp, but nevertheless there is consumption. I have reported this to the Securitas several times. They are not interested. Other times I have asked Securitas to keep the camp quiet at night so that I can sleep. My request was ignored. I now stay in the common room until the Securitas turn off the light in the evening. Being locked up and waiting leaves people struggling and dissatisfied.”

The text is a field report from a federal asylum center. For migrant people who would also like to share their experiences and/or analyses publicly, please feel free to contact www.migrant-solidarity-network.ch.

Ideal Christmas Present through the Lens of Mindfulness
3 years ago