Noor Alamery 2 years ago No Comments 4 likes
Warning: A non-numeric value encountered in /customers/5/3/8/lucify.ch/httpd.www/wp-content/themes/cuckoo/single.php on line 59 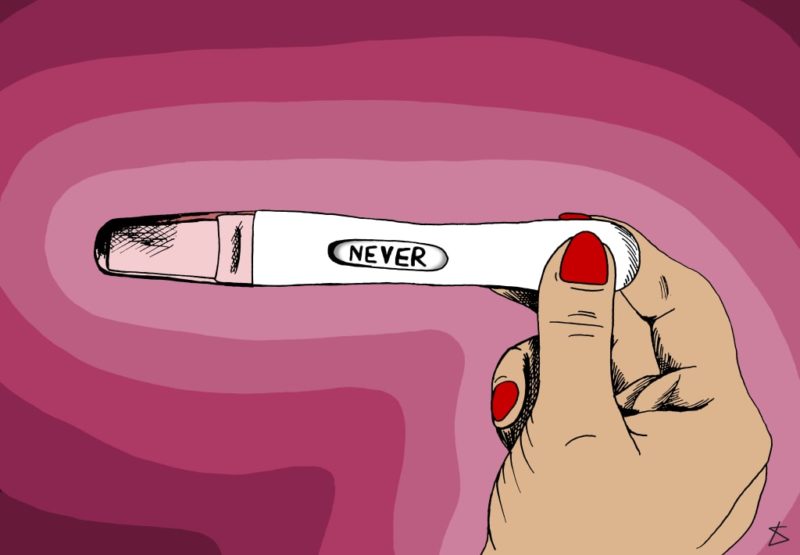 I don’t exactly remember when I became childfree, some people were born lacking that desire, but some people chose to be childfree while they could have equally been happy as parents for various reasons. Because choosing to become a parent or to never become one is such a personal matter, individuals will make their final decisions at different stages of life and for various reasons. Thus, there is no unique way to determine whether or not one should be childfree. I’ve always enjoyed spending time with children and babysitting them, But I always had a feeling deep down that said: I don’t want any of this in my life. Ever.

I’ve never cared for it until I’ve reached a crossroad in my past long-term relationship where I had to decide, By then I didn’t realize I don’t EVER want to have children, I didn’t even know what childfree was.

After the relationship ended I was very confused, Simple everyday life situations would make me ache, such as seeing a young couple with their child in the park, A pregnant woman in the bus, newborn crying, but my ache was different, my heart would crunch and my chest would choke screaming: I don’t want that.

As the stereotypes  have always portrayed motherhood as the highest purpose in the life of a woman, it has been established in our brains since we were born that our entire existence revolves around our reproductive parts, mainly that’s why we don’t get sent to war for example, so when we decide not to use them, then we are not fulfilling our ultimate feminine purpose.

Ever since I became more familiar with the concept, and other related concepts such as Tokophobia – The phobia of pregnancy- I have started defeating the fear of social acceptance and discarding all previous Customs and traditions, but it’s not that easy isn’t it?

These things still clung inside no matter how hard we try.

It is the main reason why I’ve stopped dating, and why I refuse the idea of relationships anymore, even though I am still young, my insecurities have started to hit differently.

I feel like I’m not allowed to have feelings for a person anymore, just because my wants seem out of the ordinary.

I don’t want to meet someone, have a special connection, fall in love then realize we both have different things and stand in the middle of the way not knowing what to do.

I don’t want to feel that I owe my partner anything just because they agreed to not having children because of me, and even if they told me they don’t want children, I’ll be waking up every day waiting for the moment where they say “I can’t do this anymore”.

It’s the moment where you’d ask yourself: why couldn’t I just be normal?

It may not seem realistic, but such a decision does come with its fair share of overthinking and self-doubt, as the society romanticize the experience of starting a family, we become more and more self-conscious about whether or not we’re normal.

Usually when I would say something like “I don’t want to have children” almost definitely the reply would be “you’re still young, you’ll change your mind later” or “you’ll meet someone who changes your mind”.

It is quite hard to understand that despite age, interests and environment, not wanting children could develop at any age and anywhere.

In an online survey we’ve made, where 119 people participated from the middle east, The Participants were aged 20-45

Women were asked: Would you choose never having children if you had the choice, despite having the physical ability to do it?

57% of women answered Yes, 30% of them already had biological children

43% voted No, 35% of them already had biological children.

“F.M”, A 27-year-old mother said: Doctors have warned me that it is very dangerous for my health, But the society pushed me to do it for religious reasons, And my Husband wasn’t supportive either, I’ve had difficult birth complications that I still suffer from until this day, and if I’ve had the choice I wouldn’t have done it.

The men were asked: Would you accept your partner’s decision of not wanting to have children despite having the physical ability to do it?

59% voted Yes, none of them had biological children.

Even though the survey wasn’t made for academic purposes, It has given me a view of how different aspects of life could affect our choice, and that some women don’t even have the ability to choose whether they want to use their bodies or not.

“childfree” was found in many people from different backgrounds and genders with different careers or no careers at all who were not all familiar with the concept itself but rather the feeling of not wanting children.

Important subjects such as – the phobia of pregnancy or not having the interest in becoming a parent or feeling less of a human for not wanting to-, are not being discussed publicly, therefore no awareness is being brought to this spot, and the whole concept seems just abnormal, even for those who believe in it.