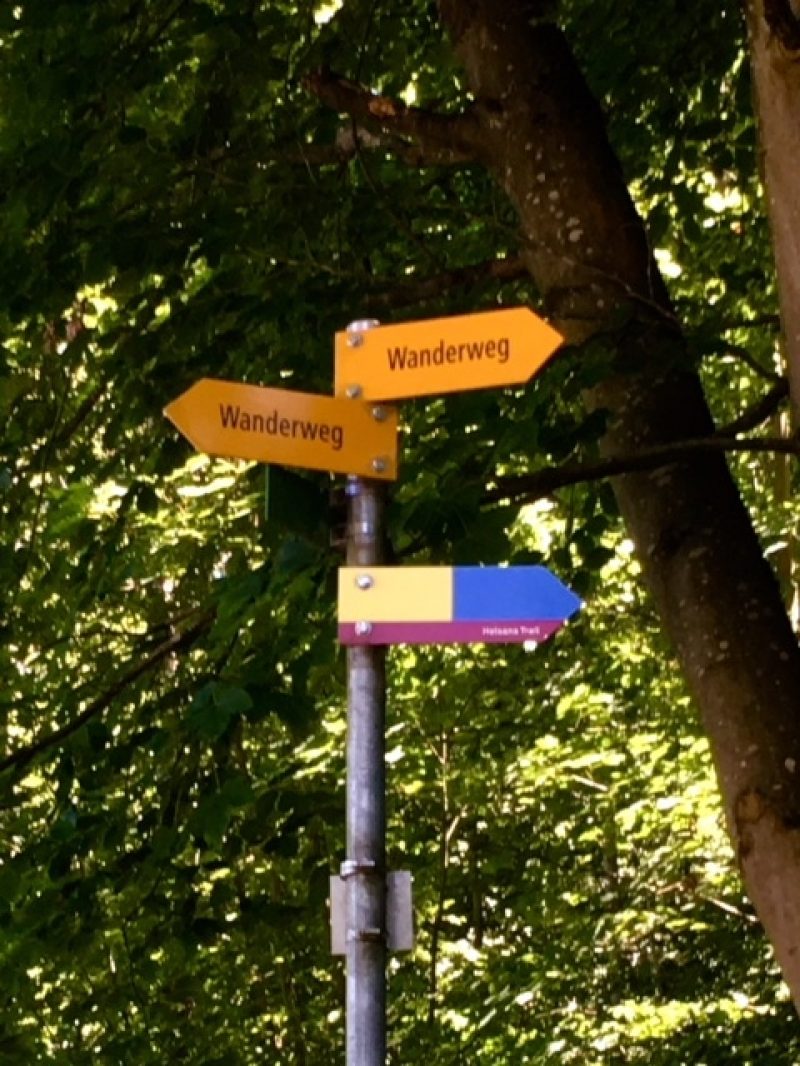 Recently I’ve been invited by the university friend to join the activity “Wandern für alle”. Kathrin admitted, that one day she had enough of her “office-life” and felt like engaging into something that could also help people to socialize and make new friendships. This intrigued me!

I asked myself: what motivates people to hike? So, I joined the “Wandern” activity and tried to find it out. The organisation  “Wandern für alle” is open to everybody. Its main goal is to facilitate access to the culture of hiking for people from non-privileged backgrounds who otherwise have no possibility to enjoy it. It is a perfect possibility to make new contacts, to do something good for the health, to explore the surroundings and to improve German.

The hiking that I joined took place in Ostermundigen forest. We had a possibility to see the famous “Steinbruch” – the place from where the stone was taken to build Bernese Cathedral (Berner Münster) and the old city of Bern. Despite the heat of July, 40 people joined this activity, among them  locals, migrants and people from a refugee camp. The atmosphere was amazing: so many people, everybody with her or his own story…

…I met an aged Swiss lady who told me that she learnt about the activity through her Spanish language club. We talked with her about traveling, music and the meaning of life. And even though there were more than 40 years difference between us, it felt like I talk to a good friend.

…I met a woman from Macedonia, who was so eager to learn German that I was totally  impressed by her motivation.

…I met a man from Afganistan who knew by heart all the bus numbers and routes in the nearby region. And he wanted to learn even more: you can consult with him as with the hiking-encyclopedia!

…I met a local boy from Bern who told me a story how he went to Indonesia without knowing the language but willing to be helpful.

…I met a woman who did not know the German well enough but she was showing me her beautiful hena-tatoos and we understood each other without any words.

…I met another man, who was offering everybody fresh apples. And before I could remember his name, I noticed his kind offering hands.

….I met a Swiss girl who told me a story how she went to Russia for the World Cup and took a courage to travel to the far away regions without knowing the language, only trusting into her intuition and kindness of the local people.

…And I also met a child who had partial loss of hearing. We became friends after I showed him which berries in the forest he can pick.

I met so many people! Not just hikers, but real wanderers! And everybody was like an open book.

What fascinates me as somebody who studied philology, is that German word for “immigrate” also has “wander”-element(“Einwandern”).

Returning to the famous line from “Lord of the Ring”, I think, wandering is a perfect way to raise your self-awareness. When you walk, one step at a time, you move physically but also your mind makes a move forward. You do not simply roam around but you explore. You open your eyes, your heart and your mind to the new. So, you build your internal capacity to change. And when you are able to change, then you are able to stretch your hand to others, to open your soul to the new, to absorb all that good that you meet on the way and to feel accepted.