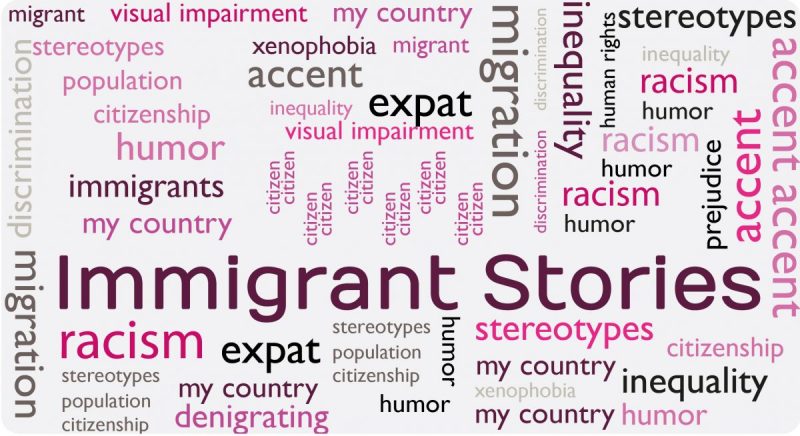 Racism, discrimination, xenophobia and prejudice are the most stinging forces often encountered by immigrants. Even though hurtful words are sometimes hurled totally unintentionally or in jest, rarely are they music to an immigrant’s ears.

It’s been five years since I moved to Switzerland. I often get asked if I have faced any directly malicious racist remarks here. My answer is: No. One possible reason for this is that I am often addressed more as an “expat” than an immigrant – in other words, I come from a more privileged background than some other newcomers in Switzerland.

That isn’t to say I haven’t been subjected to stereotypes or prejudice at all.  I laugh it off when people presume that I work in information technology, or that I know Bollywood dancing because I come from India. To their disappointment, I am good at neither. Once my neighbor said I must be fine with 30-degree weather – since I come from India, I must be used to the heat. “I am used to this weather but I still don’t enjoy frying under the sun like an egg,” I replied half laughingly. Laughingly, because I knew it was an ‘innocent’ presumption.

Humor is a good way to deal with some of these remarks. However, there are still some situations that are far from funny. Stories differ from migrant to migrant and from situation to situation. Some experiences leave a bitter taste that lasts forever.

A professor at a major Swiss university, who immigrated to Switzerland at a very young age from Iran, shared his experience with Lucify.ch.

“I sat in the first class of the train by mistake. I suffer from a severe visual impairment. A conductor came by and when she saw my second-class ticket, she slapped me with a fine… I tried to explain my mistake, but the conductor either didn’t believe me or didn’t care. Upset, I muttered that this was typical of my experience on Swiss public transit. The conductor spat back, “well if you don’t like it here, why don’t you just leave?”

Shocked at her response, he told her he was a Swiss citizen and that Switzerland was his home. “Klar, ein eingekaufter Schweizer,” came her reply. “She accused me of buying my citizenship and unsurprisingly, she refused to revoke the fine and left me sitting there, confused and very rattled,” he said, visibly upset over the experience.

There are many incidences of racism in Switzerland these days. The country has more than two million foreigners. It is one of the most favored nations for immigrants. With more diversity comes growing racism. A Federal Statistical Office report recently stated that 60% of the Swiss population considers racism an important social problem.

Another report by the Network of Counseling Centers for Victims of Racism, 2017, showed that most racist incidents occurred in workplaces or education and training institutes, and the most common forms of discrimination are unequal treatment, insults, and denigrating treatment driven by xenophobia and anti-black racism. The report also mentioned that hostility against Muslims and anti-Arab racism had increased from 2016.

Last year there were reports about racism at the ETH university. Racist graffiti and slogans like ‘No Asians’ appeared on the walls and lifts of the university. Photos of some of Asian students were also crossed out.

One PhD student at the University Hospital of Zurich said she faces a lot of challenges at work, as her European/Swiss colleagues feel “she may not be very good at presentations as she speaks with an accent.”

“Doesn’t everyone speak with an accent? Even the British have an accent. I am often asked not to make a presentation with the accent-excuse. I think it is highly prejudiced,” she told Lucify, requesting anonymity.

Racist remarks in the workplace are quite regular. Another migrant woman, after putting great effort into finding work, was called for a job interview. “They offered me a really low salary. Their excuse was that since I came from a third-world country, the salary they offered was still much more than what I would have gotten in my country,” she told Lucify.

While it is unfair to assume that everyone is biased or anti-immigrant, comments like these are quite common in an immigrant’s life. Whether immigration is a good thing or not, and whether the governments should support immigration, are the issues that require discussion in larger platforms, at a political level.

For us, for now, the pressing question is: how do we curb the tendency to confine people into boxes? Can every Sri Lankan can be assumed to work only in the kitchen? Similarly, can everyone from Turkey be assumed to own a Turkish shop?

Are we not implicitly biased against immigrants?

With inputs from Juliet Manning

There are 24 specialist agencies in Switzerland which offer advice on racist discrimination. The ‘Advisory Network for Racism Victim’ is a joint venture between the association human rights.ch and the Federal Commission against Racism EKR. For more info @ http://www.network-racism.ch