Anna Butan 3 years ago No Comments 1 like
Warning: A non-numeric value encountered in /customers/5/3/8/lucify.ch/httpd.www/wp-content/themes/cuckoo/single.php on line 59 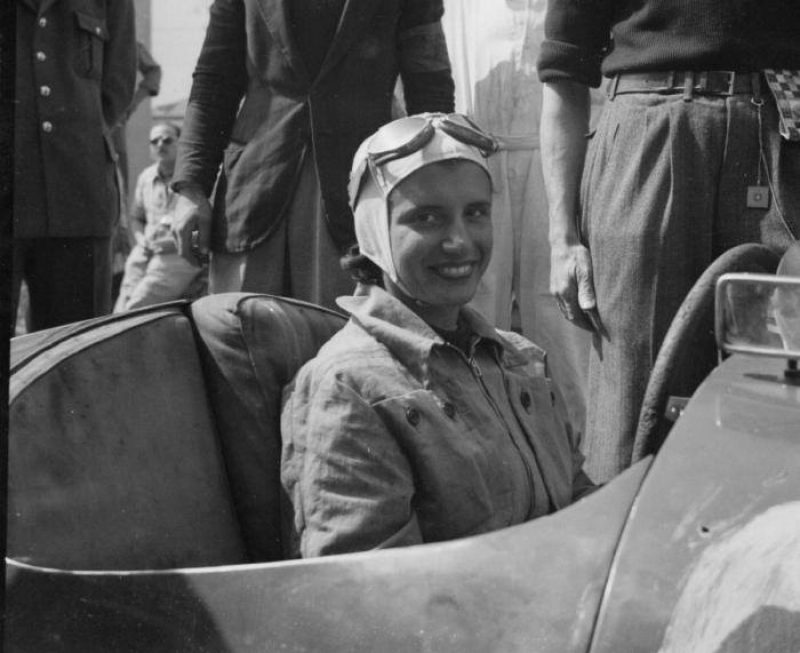 Walking through the exhibition „Grand Prix Suisse 1934-54“ in Historisches museum of Bern, I came across the picture of a woman in racing clothers bravely looking at me. Rita Rampinelli. Swiss lady participating in the Breamgarten Swiss racing event. Who was she? How much courage did it take to step on this road back in the 50s?

During the long history of the motorsport few women took a courage to enter this presumably macho-world smelling gasoline at the circuit and champagne at the podium. Needless to say, female pioneers who paved this road for other women did not have it easy. They deserve our respect and more attention. Rita Rampinelli, Swiss car racer, is one of them.

This woman from Schaffhausen was called the “racing Amazon” of the fifties, the breaker of conventions. How did it feel to be a pioneer in man-only industry? In the post-war period woman belonged to the kitchen, not to the motorsport. Rita Rampinelli, Swiss racer, took courage to transgress this stereotype. This task was uneasy: how to build a name in the racing industry, independent from a father, Emilio Rampinelli, a well-known racing driver? How to prove that woman can and should belong to the motorsport as well? And the most difficult: how to compete with men on a racing track without being ridiculed? One needs enough stamina and motivation to do it in 50s and Rita Rampinelli had it.

She was not only a brilliant race pilot but also an exemplary business-woman, a female garage owner, curling player and a tennis player. With her beloved “Cristalina” and “Porsche” she became one of the best Swiss car racers. Rampinelli won the 6th place in the famous Grand Prix of Bremgarten which is a significant success for a woman who had to compete against men (there was no female category in this competition).

This lady was never exposed to the idea that there was anything that a woman could not do. In this sense, her family did not limit Rita by gender conditioning but supported her in following her dreams. Needless to say, that back in 50s it was uneasy task especially under the pressure of public opinion. Discriminative discourse about ability of the woman to appear on a circuit as a participant was a common place at that time: is a woman anatomically, mentally and emotionally fit for car racing?

Only now, as we have more and more female names in this domain, one can clearly state, that in motorsport main qualities required are courage, commitment and strong motivation. Both, women and men equally have them. And both, women and men should work equally hard to achieve success in the competition.

Many of us would say, that car racing industry is up to now still marked by male dominance: from the spectators, to mechanics, engineers and pilots themselves. Women are immensely underrepresented on these positions. In the demographics of car racing females are still minority. It is a long way until our society establishes full acceptance of women in motorsport even though there is more and more understanding of the fact that gender is irrelevant there. Fortunately, more and more steps are made in this direction.

During Geneva International Motor Show in 2018, FIA Women in Motorsport Commission launched “Girls on Track” initiative with the purpose to encourage participation of young women in racing. This action is an attempt to establish a new motorsport culture and a lifestyle community where values of female participation are not only taken seriously but simply become a norm.

At the end, the key factor in car racing is not a gender but individual performance. The example set by Rita Rampinelli and her followers demonstrates to women that breaking through the established societal stereotype is not completely impossible. Courage, commitment and passion can move mountains. There is nothing that woman cannot do!

First recorded female racing took part in 1897 in France when a group of Parisian women raced on motorized tricycles around the horse-track.

The exhibition “Grand Prix Suisse 1934-54” can be seen until 22 of April, 2019. The exhibition does not focus only on technical aspect of the motorsport industry but places Bremgarten racing event in a larger context.