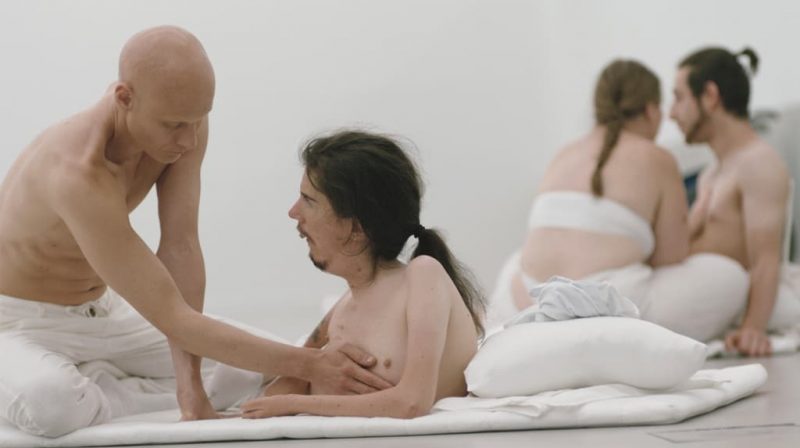 The grand tantric master Osho might like to see how director Pintilie and her associates have reimagined some of his usual methods concerned with group dynamics in this Berlinale winner in 2018. But I don’t think it would be something particularly interesting to him, although the topic is eternal. The film is also partially inspired by Marina Abramović’s performance The Artist Is Present, and some introductory therapeutic exercises devised by psychologist C.G. Jung. She has also used several tantric kundalini yoga methods of self revealing, one of the most important being loudly confessing our biggest fears to the world around us. The whole team had been working on this film for seven years, so Pintilie is well aware that brushing off the sexual tabus is a long and erratic process, but still, after so much time, we have the right to ask for more detailed answers which we haven’t really got here.

For a more genuine analysis of the world of intimacy, it would be more constructive if she would stick to one or two of used methods and just observe it. In addition, it would be more useful if she has kept this movie (only) in the confines of the documentary genre. There is so much to show about human fears concerning sexuality during a real workshop or session with the therapeut, no need for acting in any treatment process (Laura Benson and Tómas Lemarquis, both professional actors, are starring in this movie). Some of the psychotherapeutic exercises she has used are actually carried out by filming and in the next session the process goes further by watching the filmed material, which, in turn, could also be filmed.

There are so many atavisms from our relationships with parents and society (and what these people did to us; mostly with good intentions) during our transformation into sexually independent beings, that we already have become (very good) actors in our own lives, hiding ourselves behind plenty of masks. Pintilie deals through dialogue with that issue, as well as she tried to emphasize the difficultness of striping off masks in our everyday lives through the methods she used. That’s one of the main issues elaborated in this movie, which also makes it especially important.

A soundtrack full of noise made by separation of parts and scraping metal, depicting cracking under pressure, is made by a notable film score composer Blixa Bargeld. The word Mela from Die Befindlichkeit des Landes /The Mental State Of The Country/ is repeated multiple times. Although sang in German, Mela means an apple in Italian. According to the Biblical allegory, by eating a forbidden apple, Eve introduced the (forbidden) sexuality into this world, where we differentiate good from evil. It is a world of sexual polarities where people are torn between pleasure and guilt – a world in which the film is set. Pintilio mostly wanted to show how humans are withheld in their own minds by the forced attitudes from their environment and that the process of revealing brings something different to every person.

Christian, the brightest character in the whole movie actually got too little screen time, and this film wouldn’t be as boring as it is in some parts, if we could discover more about him, and his way of managing sexuality. Sweet Christian, although being physically disabled, intellectually is an incredible researcher and just loves life. After many years of attending tantric courses and schooling, I am confident enough to claim that him and the transsexual Hana are the only two who were immersed in the tantric consciousness. And this film tries to show the path towards opening of the human mind into tantric consciousness. The first step on that path is overcoming of fears. In the first few moments with the amazing Christian we see gratefulness shining out of his big eyes which actually saves his soul trapped in his incomplete physical body. On the other hand, the therapist Hana is the only easy-going and relaxed character present; (s)he is a breath of fresh air in the stiff atmosphere of this movie. The lack of thankfulness and easiness in others is strongly connected with fears (as repeated profusely in the film) and here we observe people petrified by fear, quietly living their lives hidden behind the masks.

Nevertheless, I consider this movie to be very educational and above all – a necessary part of the film canon about intimacy. How we live our sexuality and how we manage to cope with it, greatly defines our satisfaction with our lives, our characters and mental health, as well as our ability to work and create. Genitals and human bodies are shown in close ups and from different angles which is unconventional for art movies.
Taking this into account, the confusing state in which film has left us after seeing it, as well as the quantity of filmed material, could be forgiven (to some extent). In addition, the world of sexuality and its ‘practical application’ in everyday life is often confusing and vague, and it’s not easy to speak or shoot a film about it. So, to deal with such topics, to develop a sense on what to show and how to question each aspect in this wide area of issues, requires both a great mental maturity and experience, and intrinsic knowledge about the human nature and sexuality; otherwise money goes out of the window.