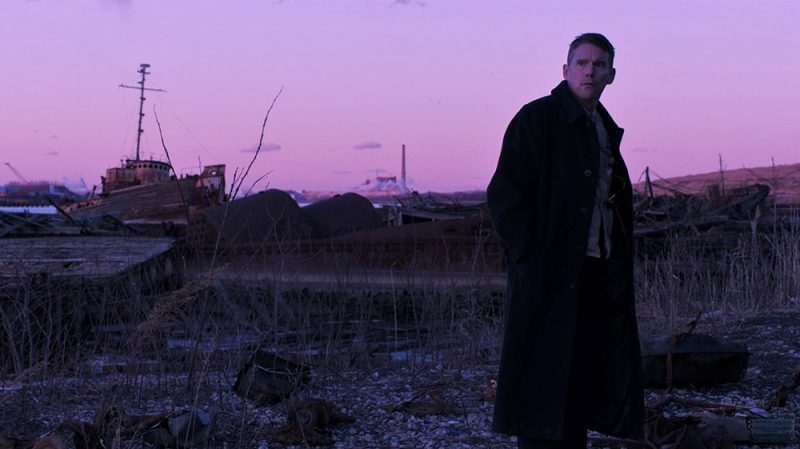 ‘Will God forgive us?’
‘Did Jesus worry about being liked?’
(quotes from the film)

Interwoven with both spirituality and religion, First Reformed shows us the crisis of Reverend Toller (portrayed flawlessly by Ethan Hawke), who lost his faith but still stands as a humble God’s servant. This is not strange considering the fact that the director and writer is a master of desolated men characters engaged in a some sort of a conflict with the world around themselves (Schrader wrote the screenplay for Taxi driver and the The last temptation of a Christ – based on a novel, and co-wrote Raging bull, etc.). He is also the author of a book Transcendental Style in Film, first published in 1972 and again in 2018. First Reformed is nominated for the best original screenplay, and that’s Schrader’s first Academy Award nomination so far. Film already stacked up quite a few nominations and awards for the best screenplay, as well as Ethan Hawke for being the best actor.

Soren Kierkegaard’s book Sickness unto Death was mentioned in the first conversation between Toller and a disappointed eco activist Michael (Philip Ettinger). Soon we realise that Reverend Toller exposes his life to a religious phase (according to Kierkegaard, it is the third phase in a person’s life when a mortal, temporal man is risking his life in a way because he cannot fully understand the eternal and infinite God). Many yogic, buddhistic and theosophical literature describe this level of spiritual development of a soul, name it and classify it each in a different way.

Great jnana yogi Swami Vivekananda says no one and nothing can describe our deepest intimate relationship with God. He also maintains that whenever this relationship is defined, it becomes an institution. However, by expressing how we perceive something, we make it much closer to the people who are still not so familiar with the subject. And the author grows through that process, as well. But nevertheless, beside his personal doubts, Reverend also felt uncomfortable within The First Reformed church and Abundant Life association and obviously had many problems with institution(alisation). Actually, he struggles to accept that the relationship with God actually is transcendental, while the institutions in which people placed their Gods, are just doing their job (gaining profit and followers).

Michael tried to find a solution for his disappointment, which strongly touched Reverend’s faith. However, the gravity of Michael’s fundamentalistic ecological theory (he died for it) is a great example how fragile life is when ‘reason provides no answers’ as Toller tried to answer his questions. The satisfying answers about God, faith and the loss of both in each person’s life should not even be searched in the field of reason, since they do not dwell in that area. Reason is the shadow cast by God; God is the sun. /Rumi/

By losing his faith, Toller blames and punishes himself. It is notable that Schrader, beside being a director, is also a theologian, was raised by strict calvinist rules – his parents did not allow him to see any movies before he was 17 years old. I would say that according to the importance of sin in calvinism, this film mostly speaks about the moment when Toller has discovered he is a sinful person. Just like everybody else. So, he fell in an abyss between an idea to kill himself out of shame in front of his God, and to step forward into a new spiritual dimension, which requires full abandonment of his old comfortable thoughts and habits. And, what’s even more difficult – to go beyond this abyss, he needs to find a new version of his God. Toller, although being a devout Christian and a priest, found himself in a situation he has never been before. This paints the picture of the typical step forward in the spiritual path; it is shown very well as Schrader speaks out of his own life experiences.

It would be a sin not to mention the levitation scene, and the astral journey in connection to it. It starts when Mary (Amanda Seyfried) – the only possible name which a pregnant priest’s girlfriend could have – laid down on top of Toller, both of them on the floor, in a moment when he’s already quite lost in apathy. Although the scene slightly reminds of editing tricks in cheap films about spiritism, it does not diminish the grandeur of representation and the astral world in contemporary cinema. Especially because it is depicted through love between two people; and love is the key to the doors of an astral world. The astral level is beautifully called the astral light in some theosophical literature, and this film shares some similarities with the plot of Bergman’s classic Winter Light. Diary of a Country Priest, from one of the Schrader’s role models Robert Bresson also served as an inspiration for this film. Director Schrader said that Bergman, Bresson and Tarkovsky’s work, alongside with Pawlikowski’s Ida mostly influenced his idea and the development of the First Reformed. Mary and Toller’s short astral gathering becomes the cornerstone of their future relationship. The long kissing scene in the middle of a big room, with Toller being wrapped with a barbed wire and bleeding under the white gown while music is amplifying the atmosphere, dramatically closes the film.

This is a must-have for every true seeker of meaning of life, no matter from where he starts. Moreover, it’s a piece for the movie lovers questioning man’s faith and those who consider life to be a spiritual journey, as well as for the ones who enjoy the transcendental style in cinema. There are so many amazing human, life and spiritual issues touched in this slow movie. But, as Schrader says, the convergence on spirituality and cinema would occur in style, not content. To be able to enjoy Schrader’s art of dead time in First Reformed where the inner space slowly opens and activates the viewer’s reaction, just by watching nothing – is the real moment when (according to his own words) going to a film becomes going to a church. Commitment is made.

The BugLady
3 years ago

Pesach in time of Corona
2 years ago