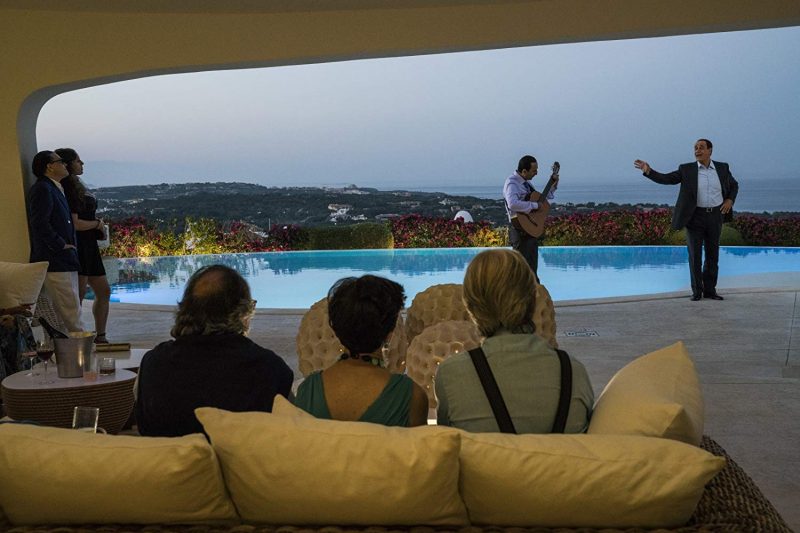 An older rich woman business director invites 30 young, half-naked men over for a lovely dinner in a garden. The fine looking men are actually employees of an escort agency led by a woman who is the puppet master of the whole ordeal. It does not matter if it’s based on a true story or if it´s purely a work of fiction. Does this mean that women are as emancipated as men? Still, this scenario would be highly unusual both in a movie and in real life. Since such a scene would be a great source of pleasure, many women (including myself) have been eagerly waiting for it.

But this scene did not make it into the new Sorrentino movie, sorry ladies (and gents). Just the opposite. The director´s usual obsession with scantily clad femmes and arrogant lonely powerful men this time did not produce a movie that would continue the long line of his successful films.

The visually stunning picture with immaculate compositions, colors and brightness is there as usual, but the film fails to produce a real reaction. Maybe the blame is to be placed on replacing the contemporary grotesque and much adored mockery with (unnecessary) effects and a feeble plot. Instead of creating a potentially dazzling film, Sorrentino fails to enchant us with a lascivious video game which aims to tell a story about the bruising of a male ego; how a childish, narcissistic politician plays the role of both the savior and the folk entertainer. The music is yet again selected with great care.

The MDMA flavored party scenes by the pool, backed by the simple lyrics of (Must be the reason why I’m) King of my castle paint the picture of both pimp Riccardo (Sergio Morra) and Italian prime minister quite clearly. These few minutes could also be regarded as a re-boot of the video for the legendary tune. The seduction scene on the merry-go-around accompanied by Domenica bestiale (A Fucking Awesome Sunday) by Fabio Concato is just one example where the director marvelously blends the funny, the sad and the bizarre. Lele Marchitelli as one of the Sorrentino’s long term collaborators wrote the original score. The attention to detail is visible, more precisely, audible.

This is the fifth Sorrentino’s movie with Toni Servillo cast in a leading role (his only Italian-language movie without Servillo is The Family Friend), and their second political drama. Sorrentino and Umberto Contarello co-wrote the screenplay, just like in many previous movies and TV-series. Although there are many juicy stories and amusing tales about Mr. Berlusconi, I found this movie quite uninteresting most of the time. Silvio is portrayed as impassive, even though he claimed that he ‘knows the script of life’. Many Sorrentino’s movies pose questions about the meaning of life, apathy and most of them describe the daily lives and habits of the rich. In this case, he tried to do the same, but (too many) superfluous characters appear in the protagonist´s life and trying to become a part of his inner circle, so the whole movie feels like an elaborated, but confusing mess.

Moreover, women are treated like men’s (material) possessions. Their beauty and bodies are used as a means to earn money – the females are for sale, and the men are salesmen. Why do these women submit to these horrible transactions? It is clearly stated that the only treasure they have is their physical beauty. The prostitute Kira (Kasia Smutniak) becomes jealous of a young girl, because she got the prime minister´s attention. Kira valued herself only in terms of attracting wealthy and distinguished men’s attention, which she deemed her everlasting feature, just like her corporeal beauty. Suddenly her outer beauty started degrading, so she doesn’t have anything to sell anymore. Kira must have found great pleasure and pride in being treated as a beautiful object in such an abusive environment, being constantly surrounded by jerks. Maybe she thought she was free and capable because she could easily cash in her beautiful body?

But freedom is more than developing a thick skin, and shrug off controlling men – it also comes from the inside. For men and women, and all genders. Freedom, as more or less everything in the world, has its levels that have to be discovered.

The way Mr. Berlusconi tries to seduce again his wife Veronica of nearly 20 years (Elena Sofia Ricci) brilliantly shows how superficial he is as a husband, man and person in general and how he degrades Veronica to another female objects he has to posses. When she tried to let him know that their marriage could only be saved if he changes, it became obvious that this is impossible. He doesn’t even want to change; he states that it’s not enough to have all material possessions in life, but never clearly defines or explains what it takes ‘to be enough’.

Loro was first released in Italy in two parts, Loro 1 (104 minutes) and Loro 2 (100 minutes), but was cut for the international version, which was released as one movie. Mr. Berlusconi’s company Medusa film that previously financed Sorrentino’s work, refused to take part in this project. However, not even the desperate director’s attempt to add liveliness by making Silvio activate an artificial volcano in the closing credits could not save those international 150 minutes.

Sorrentino made many movies without a striking female protagonist, and added insult to injury in this last one where women are shown in such a vulgar way. The only woman character to be remembered was Jane (Frances McDormand) in This Must Be The Place, but she appears only briefly in couple of scenes, thus serving as the exception that proves the rule and leaving his audience hungry for a strong woman. In addition, in his previous movies he grabbed the attention of various audiences which is a rare quality nowadays. However, I’m sure many intellectual female (as well as male) audiences will be discouraged from watching any of Sorrentino´s films by this hole in his career.