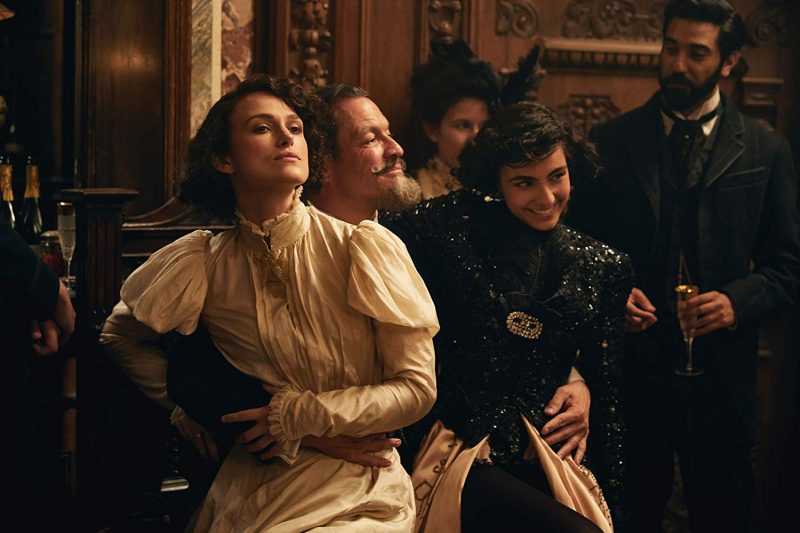 Men’s authoritative and controlling behavior towards women both in personal relationships and in the workplace is a big issue to be discussed after observing the life of Mr. Willy and his lovely muse. How far his type of behavior might go and where to draw the line?

In the film, it is emphasized that young Colette (Keira Knightley) had no chance for any activist, creative or artistic work in her life without Willy (Dominic West). Willy fell in love with Colette and took her to Paris and exposed her to one of the most vibrant cities at the turn of the century. He also showed her one of the possible ways to earn money in that emerging world. Regardless of his true intentions, Willy opened the door for Colette who otherwise would have no clue about all these things.

Willy steeling Colette ́s original manuscripts and forcing her to write under his name, with the excuse that he is a brand, was a very vicious act, but also a common product of a materialistic world. In a world where money and fame fuel success, the only possible crop was Willy ́s actions. So, when young Colette realized for the first time that her dear Willy is not a faithful husband, she went back to the country to ponder upon the role she played in Willy ́s life and to cope with the bitter reality of it. As time passed, Colette became accustomed to play many roles – a wife, muse, secretary, concubine and writer of his novels; at the same time, she was an artist in disguise with an incredible talent. Colette faced all this with such a positive attitude, and was not overly dramatic about it or expressing her inner emotional turbulence. That is one of the best features of this movie in general, as well as Colette’s important virtue as a character.

A subtle grotesque note in the movie often lightens the mood in difficult situations but cannot soften the harsh reality of being someone’s slave under the false pretenses that it is all for business purposes. But still, for the sake of authenticity and tameness, it would be more convincing if this Hollywood flair in both storytelling and editing had been avoided. The whole movie is mostly accompanied by a classical score, which in many moments contributes to this grotesque atmosphere, but feels out of place in several scenes.

Colette ́s later female lover Missy (Denise Gough) helped her to emancipate herself even more and supported her work and art. Missy had a stroke of genius when she made Colette question what really makes her happy. Missy ́s masking and playing the interesting supporting role of the marquis is marvelous. It is not an easy task for a male film director(s) to establish and reassess such strong and inspiring female characters, in both main and supportive roles. Westmoreland wrote the screenplay in collaboration with his deceased husband Richard Glazer, with whom he also wrote and directed Still Alice in 2014. Rebecca Lenkiewicz who is notable for developing distinguished female characters fighting for their freedom also worked on the script.

All these intrigues are laced with Willy ́s greed, his desire for earning money, selling stories, and becoming more and more famous within Paris circles. After all these turbulent events, Colette realized what people are like and what she has to do to succeed in that wicked world. She also set herself goals to achieve and started working hard to reach them.

Although the events in the film take place at the very beginning of the 20th century, the same harsh rules of the game apply even today, skillfully hidden under various expressions and often resulting in more cruel actions that we have seen here.

The movie Colette will start in Switzerland at 3. Januar 2019

You are (all) that
2 years ago